The fear of ghosts and spirits seems to be almost universal in the world, cutting across every culture and society, cropping up even in places where the dominant religion rejects the idea of them.  In both ancient and contemporary folklore, ghosts were believed to be the disembodied spirits of human beings that have “unfinished business,” often those who died an untimely, unjust, or violent death.

The classic romance movie called, of course, Ghost, is precisely 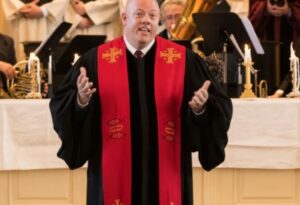 about this larger idea: a young man deeply in love with a woman is killed in an apparent street robbery and finds himself returning as a ghost that his love can sense in some ways but not see, because he has “unfinished business,” and the rest of the movie is a discovery of what, exactly, that is, and what it will take before he can complete that and be “at peace.”

That’s a common folk understanding of what ghosts are and thus they are tied to people and places and activities that were important to them in life, and those same cultural superstitions floated around in the 1st century in general ways as they do today, regardless of what the orthodox beliefs of our religious traditions say. So it’s no surprise that the disciples’ first reaction is one of fear at the sight of a presumed ghost; I doubt many of us would have reacted much differently.

“Why are you frightened?” Jesus asks them, which does seem a bit unfair, even as a rhetorical question. I mean, Jesus has been arrested and publicly executed, and now they’re holed up in a room somewhere trying to figure out what to do and how not to get caught. When this passage begins, we’re actually in mid-scene: they’ve been arguing about reports that Jesus has been sighted by Simon and other disciples.

Everybody’s gathered in a circle, gesturing and shouting their own take on things, when in the midst of all the craziness they hear a familiar voice:  “Peace be with you,” it says, which under the circumstances is just a more polite way of saying, “boo!” And he asks them why they’re frightened? Why wouldn’t they be frightened? Who wouldn’t be frightened of a ghost that’s come back to haunt his old friends with unfinished business?

So Jesus goes to some length to prove to them that he’s not a ghost.  He invites them to look at and touch his hands and feet, because in touching them They’re overjoyed, but they still don’t believe; it’s simply too good to be true.  So Jesus asks for something to eat, which is perhaps the most tangible sign of life aside from breathing that there is: if you are a human being, you can and must eat; if you are a ghost, food will just fall right through your ephemeral body if you are going through the motions of eating.

So Jesus doesn’t just tell them he’s alive; he doesn’t just act or seem alive. He undertakes one of the most basic tasks of life with them, one that sustains not only the body but the spirit; eating is perhaps the most basic practice of community, as well. Everything about what he does is about life, and life together. And when he eats, and swallows, it stays inside of him. They look at each other in wonder. He’s real! He’s alive! Christ is risen; he is risen indeed! It’s a great ending to an amazing story, isn’t it? Jesus returns from the tomb, alive and well, rejoining his disciples to celebrate his victory over a nice piece of grilled fish.

Easter does sometimes feel like a great ending. We have the big crowds and the familiar celebratory hymns and the special flowers and music, and then it’s over; we n now when we celebrate it as Christ’s church almost 2000 years later.  The ringing of the handbells fades away, the flowers are taken down, and things start going back to normal; in fact, they’re often easier than normal: church life often feels a bit calmer, a bit slower, a bit more relaxed as Easter fades away and we move from spring into the summer.

It’s a natural reaction, I suppose.  We spent forty days in Lent preparing for Easter.  We spent Holy week walking through the Last Supper, the arrest, trial, crucifixion, death and burial.  On Easter morning we celebrated the amazing good news the women receive at the empty tomb: “He is not here, but has risen.”  What else could there be beyond that?

And so this seemingly straightforward Gospel passage today is very important for us.  It reminds us that the story continues.  You see, Jesus is anything but a ghost, but he most certainly does have unfinished business here.  He reminds them that he told them everything that was going to happen to him, and that it was all necessary for him to fulfill the Scriptures and his role as the Messiah.

Understanding the Scriptures means understanding that they are the interpretive key to understanding God’s activity in the world: they are a tapestry of characters, scenes and stories that together tell the epic of God’s love for the world that so often rejects him, and the lengths God will go to in order to share that love, in the past, present and future.

Yet Jesus’ teachings to the disciples are not simply to help them understand what has happened and complete their spiritual journeys.  Jesus needs to remind them that they are witnesses to what has happened, and give them the resources they will need to serve as witnesses: the understanding of the Scriptures and the gift of the Holy Spirit.  Jesus is completing his work with his disciples by making his unfinished business with the world theirs as well.  Easter, the resurrection, Christ’s appearance to his disciples; these things are not a great ending; they are a great new beginning that inaugurates the mission of the church in the world.

It is here, in encountering the risen Christ and understanding the Scriptures, that the disciples (those who follow) become apostles (those who are sent out).  It is here that Jesus commissions them as witnesses to go out to proclaim repentance and forgiveness of sins in his name, to be bearers of Christ’s love and justice, mercy and peace into the world.

Each of us here who has been baptized shares in that vocation to address the unfinished business of Jesus in the world.  Each of us is called to be both disciple and apostle, called to both follow in faith and go out in action.  Here we are, in the season of Easter, the season between Easter Sunday and Pentecost.  Easter is not the end, but the beginning, of a new season.  If the season of Lent is a season of contemplation and preparation for Easter, then the season of Easter is a season of renewal and rededication for all of us: children and seniors; life-long member and curious seeker; thinkers and caregivers and doers.

So, come to the table of the children of God; come to be fed and strengthened, cared for and renewed. And as you do so, consider this: what new beginnings are unfolding for you in this season of Easter?  What unfinished business of Christ’s are you being called and empowered to address?  For you and I, all of us, are also witnesses of these things, and you and I, all of us, have stories to tell, and business to finish.