A MESSAGE FROM THE REV. J.C. AUSTIN: EMBODYING GOD’S LOVE

At a recent church staff meeting, we began by sharing what Christmas traditions were so important to us that, if we didn’t observe them, it wouldn’t really feel like Christmas.

One of the most common answers was getting to watch favorite 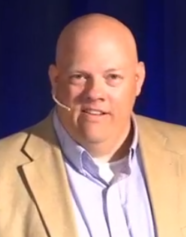 Christmas specials and movies, and several of us (myself included) named It’s a Wonderful Life as one of the must-see choices for Christmas. As I’ve said before, one of the most distinctive aspects of It’s a Wonderful Life is what a dark film it is in so many ways for much of the movie, full of disappointment and lost dreams and, at the crisis moment of the film, criminal negligence and bankruptcy and profound despair settling upon the main character, George Bailey, even though he himself did nothing wrong.

As a result, George feels that his life has been such a waste that he wishes that he had never been born at all. His guardian angel, then, shows him what things would be like in his family and town if, in fact, he had never been born. Among the things he sees are that his brother would have drowned as a child because George would not have been there to save him; the owner of the pharmacy where he worked as a youth had his life destroyed because George wasn’t there to warn him that he accidentally put poison in someone’s medication; and the town as a whole was run-down and seedy because his rickety Building and Loan Company had gone under without him, giving the evil Mr. Potter total economic control of the town.

But none of those things are what finally turned George’s heart. What did it is when he finds out his wife, Mary, has never married since he was never born, and instead is living out her days as a lonely librarian.

This is the one part of the movie I’ve always disliked, because it has always seemed both sexist and, frankly, improbable. The idea that Mary never getting married is a tragedy seems insulting to single people who don’t get married for all kinds of good reasons. And second, are we really supposed to believe that someone whom men are falling over themselves to be with early in the movie couldn’t have found someone to marry?

In the last week, I’ve seen an article online circulating that addresses this very problem, and its answer is in the title: “There Is No Mary Problem in ‘It’s a Wonderful Life.’” If you love the film, then I commend the whole article to you. But the gist of it is that those objections about Mary are missing the whole point of her character. It’s not that Mary’s life is lesser without George; it’s that she wasn’t willing to make it lesser by settling for someone else.

As the author says, “In the world where George does not exist, she has not married not because she couldn’t, but because she does not want to. There is not a Mary-sized man in town, and Mary Hatch does not do anything just because it’s what might be expected of her.”  Mary saw George’s true goodness and even greatness in ways that George himself never saw or understood; she loved him and pursued him because of that.

And it is only when George understands that he has lost that, that he has lost her, that he truly understands how wonderful his life was, and begs that he might live again, even knowing that public shame and punishment are in his immediate future. And the only reason that does not come to pass is because Mary alerts the town to George’s accounting problem, and they rally to donate more than enough to set things right.

It struck me, in reading the article, that perhaps the most Christmas-y part of this quintessential Christmas movie is this overlooked part of Mary’s character. Because she, effectively, is the embodiment of God’s gracious love that is incarnated in Jesus Christ at Christmas: a love that pursues us rather than us having to pursue it; a love that comes to us when we weren’t looking for it; a love that understands us better than we understand ourselves; a love that calls and inspires us to live lives of gratitude for having received it.

So: if watching It’s a Wonderful Life is not one of your Christmas traditions, I encourage you to find some time to watch it this year. And if you do, take the opportunity not simply to reflect on how your own life is wonderful in unexpected or underappreciated ways, but simply because you have received in your own life the good news of God’s gracious love embodied in the birth of the Christ-child.