A MESSAGE FROM THE REV. J.C. AUSTIN: THE POWER IS IN THE STORIES

Earlier this week, a meme was circulating in pastor groups online that showed a video clip of a megachurch that had at least eight drummers practicing for a Christmas service in its worship space. Apparently, the plan called for them to be drumming while simultaneously swinging on wires from the ceiling over the heads of the congregation, all while a series of giant video screens behind them showed an exploding graphic of “JESUS!!!” in the background. It was, to say the least, quite a spectacle.

The point of circulating the clip, of course, was to critique 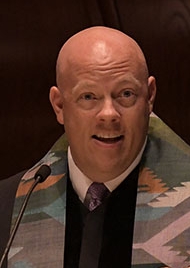 that as excessive. And, of course, it is, but the truth is that many churches have difficulty finding the line between special and excessive on Christmas Eve, and often tilt towards the latter in an attempt to attract more people to the Christmas Eve service. As I shared the meme with Pastor Lindsey, though, she remarked, “if there’s ever a Christian story that doesn’t need a gimmick, it’s probably Christmas Eve… so much humanity and wonder all by itself.”

And she is right: the power of both Advent and Christmas are in the stories, not in the spectacle. Ironically, aside from the angelic appearances, those stories in Scripture are anything but spectacular. The whole point of the stories, in many ways, is how unspectacular they are: God being incarnated in an ordinary infant born to a peasant woman in a tiny hamlet in a backwater province of the Roman Empire.

The wonder is that God chose such a way of coming to us; it goes against everything that human beings would expect God to do, to the point that U.S. churches today often try to add as much spectacle as they can muster, and the question is really just what their particular scope and budget can handle.

Here at First Pres, we try to keep our focus on the power of the stories rather than the spectacle surrounding them. That doesn’t mean we don’t have special music or services, of course, but they are designed to draw us into the Christmas story.

This year, we will have Candlelight Christmas Eve services at both 4 pm and 7 pm; the earlier service is an intentionally intergenerational one, while the later one is a traditional service of Scripture lessons and Christmas carols.

Since Christmas Day falls on a Sunday, we will have a special Christmas Day Celebration service at 10 am in Fellowship Hall. This will be a “come as you are” service, so don’t miss your chance to attend worship in your Christmas pajamas in person and not just with the livestream from your couch!

Similarly, on New Year’s Day, we will have a combined service at 10 am that will be a service of “Other Lessons and Carols,” meaning the stories surrounding Jesus’ birth and childhood that we rarely get to explore during the Christmas season.

I’m looking forward to both Advent and Christmas together as a church as we listen to these stories and explore their power and meaning anew for us as followers of Jesus. I hope you will be a part of as many of them as you can be, and I hope to see you as you do!