This week we’re sharing a summary of the results of the 225th General Assembly held earlier this summer by the Presbyterian Church (U.S.A). We are a busy and fruitful organization, taking on many timely issues!

The Rev. Ruth Santana-Grace (left) and the 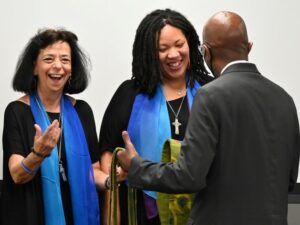 Rev. Shavon Starling-Louis, Co-Moderators of the 225th General Assembly, receive stoles from Stated Clerk the Rev. Dr. J. Herbert Nelson, II following the Moderators’ election on the first day of the Assembly, June 18, 2022, at the Presbyterian Center in Louisville. (Photo by Rich Copley)

The General Assembly voted 266-116 to approve INT-02, a “Recognition that Israel’s Laws, Policies and Practices Constitute Apartheid Against the Palestinian People.” It declares that the Presbyterian Church (U.S.A.) “recognizes that the laws, policies, and practices of the government of Israel regarding the Palestinian people fulfill the international legal definition of apartheid.”

Mission Responsibility Through Investment (MRTI) reports that this is the first time the PC(USA) has voted to divest from companies out of compliance with GA’s environmental policies (which was established in 2018).

On a vote of 321-54, General Assembly approved FIN-10, which calls for the appointment of a commission to oversee and facilitate the unification of the Office of the General Assembly (OGA) and the Presbyterian Mission Agency (PMA) into a single agency. The assembly also approved MOV-02, which moves Mission Engagement and Support (MES) from the Mission Agency to the Administrative Services Group, which supports both OGA and PMA.

The assembly approved FIN-14, which includes unified budgets for the Office of the General Assembly, Presbyterian Mission Agency and the Administrative Services Group of the PC(USA), A Corporation. The budget for the three agencies and entities totals $88.3 million in 2023 and $89.5 million in 2024. The breakdown of the budget will be 16% for OGA, 79% for PMA, and 5% for ASG.

By a vote of 340-25, the General Assembly approved IMM-06, allowing the church to declare itself a “Sanctuary and Accompaniment Church.” The assembly’s Immigration Committee says the decision sends a message that the church is committed to working for justice in U.S. immigration policy.

General Assembly approved a motion that the church renew its commitment to end gun violence by developing a 10-year campaign, the Decade to End Gun Violence (2022 – 2032).

The assembly also voted to direct Mission Responsibility Through Investment (MRTI) to engage with Walmart, Dick’s Sporting Goods and Kroger, three publicly traded companies held by either the Board of Pensions or Presbyterian Foundation, that sell guns not classified as semi-automatic and assault-based weapons.

The assembly also voted 374-1 to approve INT-19, a commissioners’ resolution condemning the Russian military invasion of Ukraine and crimes against humanity, and calling for a cease-fire and the immediate resumption of internationally mediated negotiations.

Commissioners and advisory delegates approved several items of business from the Race and Gender Justice Committee (RGJ), including RGJ-07: “A Resolution Addressing the Lack of Installed Pastoral Leadership in People of Color Congregations in the PC(USA) — From the Racial Equity Advocacy Committee” and RGJ-08: “On Offering an Apology to African Americans for the Sin of Slavery and Its Legacy.”

A two-hour plenary ended with votes overwhelmingly approving both items, and with white Presbyterians reading aloud “A Litany of Repentance” found in RGJ-08, which begins with the words: “As white Christians we repent of our complicity in the belief in white supremacy.”

The assembly also approved RGJ-12 calling for a new special committee to expose white supremacy within the denomination and make recommendations for improvement. In addition, the assembly approved RGJ-13, directing the Presbyterian Mission Agency and the Presbyterian Publishing Corporation to “create educational resources for congregations to identify and interrupt practices and policies that perpetuate the adultificaiton of Black girls and criminalization of adolescent behavior.” Commissioners and advisory delegates passed a resolution, RGJ-14, denouncing violence against Asian women and Pacific Islanders.

The Church will form a committee to write a new PC(USA) confession.

The assembly voted to change the format of the 226th General Assembly, whereby committee meetings will be held online, with in-person plenaries being conducted on site in Salt Lake City, Utah, in 2024. The assembly is expected to cost approximately $2.8 million.

Commissioners and advisory delegates approved MC-10, which creates a task force to explore the theology and practice of ordination for ruling elders and recommend any changes to the 226th General Assembly (2024). The task force will include representatives who identify as BIPOC, immigrant congregations and New Worshiping Communities. Several amendments and motions were considered, but the overture was approved as amended by the committee.