Neighborhood Church: One Thing to Do

By The Rev. Lindsey Altvater Clifton

It has been a little while since my last pulpit confession, and I’ve been stewing about this one for awhile now because it’s sort of a doozy:  I don’t know if I believe in the church.

Now, I definitely believe in God (even if I’ve got a lot of questions for them), I’m generally cool with Jesus, and I live at the mercy of the Holy Spirit (ask any sermon writer, and they’ll be able to testify to her presence).  But the church is such a struggle for me sometimes.  Now, I’m not talking about y’all or First Presbyterian in particular, but rather the wider, capital C, Church.  I want to believe in it, but I’m just not sure if I do.

I have a gut-deep, irrevocable belief in the stories of 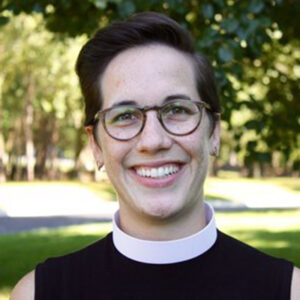 resurrection and possibilities of new beginnings that our faith proclaims as gospel good news.  But all too often the church… the institutions and even the people… we fall so short of those promises that I can’t help but wonder, what is the point?

Given the vast amount of resources—financial and physical—that we’re consuming, and the lackluster impact we’re having to actually change things for the better… are churches decent, faithful neighbors to those most in need or on the margins?  I’m not so sure…

And when you add to that equation the legacy of Christian imperialism and the forced colonization and conversion of indigenous peoples.  Or the intra-Christian violence of the Protestant Reformation.  Much less the interfaith wars waged in Jesus’ name throughout any and every period of church history.

How the church’s current fixation on returning to an idealized time of the way things used to be when churches were full and programs were bustling?  You know, back before 1956 when women were granted access to Presbyterian pulpits.  And definitely back before 2014 when LGBTQ people insisted on making the church uncomfortable with their outrageous desire to share lives of faithful, covenant commitment in marriage.

Not to mention the church’s willingness to preserve itself at any cost despite the continued segregation of Sunday worship stemming from its ties to American slavery, white supremacy, and racism. Or the long-ignored and serially covered-up sexual abuse of children and church members by ministers in every denomination from Catholic to Southern Baptist.

And the fact that the church in America has yet to eradicate the problems of homelessness, hunger, or poverty, and it can’t even talk openly about mental health or addiction, sexuality or gender identity, social issues or injustices, politics or other religions without nearly imploding.

I mean, with that resume, is it any wonder millennials and families aren’t knocking down our doors?  Can you see why I wrestle with believing in the capital C Church?

Anyhow, with that big ol’ bummer of an intro, we come to today’s text.  And it’s nothing special, really.  Yet another account of Jesus doing what Jesus does.

He’s on his way to Jerusalem, going through the region between Samaria and Galilee.  My translation: he’s walking through sorta sketchy part of town, the rough neighborhoods where “those people” live; this is a potentially hostile locale at the border, neither inside nor outside Jewish territory.  And like usual, anywhere Jesus goes, there’s an opportunity to meet people where they’re at, for him to make them feel seen and known and cared for.

For him to hear their story and offer what they need for wholeness and restoration.  And he does just that.  For ten outcasts, ten people covered in sores and scars, ten strangers who have been told they are broken and have no place with “us.”  He treats them all with dignity, he offers mercy.  He provides healing and points them back toward belonging and community.  No questions asked, no strings attached.

Just Jesus doing what Jesus does.  And we can’t forget that he’s our model for faith and our guide for church.  He doesn’t sit around in the temple wondering why and complaining about there not being more people in worship each week.  He is always on the move, and he spends most of his time in the places where hurting, rejected people hang out.  That’s where the transformation happens.  That’s where the hope lies.  Out there.  In the thick and mess of it all.

So…what about the church, then?  Shouldn’t we be following Jesus’ lead?  I think the answer to that is a resounding “YES, yes we should!”  And along with nearly every other white, mainline, protestant church, we’re trying to figure out what that looks like in the post-modern, post-Christian American landscape.

And especially for us in transition here at First Pres – in the midst of welcoming new staff, retirement celebrations, and a pandemic that feels interminable – I imagine we’re all wondering what it looks like for us follow Jesus into our own renewed identity.

Often when we read this story, our well-mannered, polite attention gets drawn to the one healed person who responds with gratitude, the one who returns and praises God.  (Don’t we all want to make sure that’s us?)  And the return and praise response of gratefulness is important.  But there’s more than that.  Jesus notices the gratitude and praise, but he also says, “Get up and go.”

And sometimes, I think maybe that’s where the church gets stuck.  We show up here each week to offer our gratitude and praise, but when we get up and go…do we really get up and go?  Are we regularly showing up with and for those on the margins?  Do we gather as a community in places outside these walls?  Are we looking for opportunities to extend mercy and wholeness and belonging to those who are outcasts?

And I’m not talking about one-off charity-mercy; I’m talking about the kind of big, transformative, Jesus-mercy that works and advocates and marches and votes and calls elected officials to create systems that are more just and equitable so that people don’t need charity-mercy.  The kind of big, transformative Jesus-mercy that regularly partners with local nonprofits to befriend those in poverty and to walk alongside them until they aren’t in poverty anymore.

The kind of big, transformative Jesus-mercy that offer a welcome so wide to our neighbors that we may well become known as the “refugee church,” or the “gay church,” or the “homeless church” and to be proud of that.  The kind of big, transformative Jesus-mercy that is willing to risk our very existence as an institution to change the landscape of the city in which we live.

Now THAT’S a church I could believe in.  And friends… I think that’s the kind of church Jesus calls us to be when he says, “Get up and go.”  Listen to these words from the final chapter of Neighborhood Church:

Here is the eternal pattern of the Incarnation. Jesus did not use his advantage or privilege as a trump card of power. He did not stay separate from the world around him. He listened with compassion and became available to people, adapting to their realities and teaching in parables they could understand in their vernacular. He emptied himself as an act of service that has guided us for centuries.

Is this our calling? Self-emptying rather than self-preservation? We believe so, but we also know it is scary for leaders who see their roles as maintaining the ABCs we mentioned in the Introduction: attendance, buildings, and cash.

Remember that the most frequent commandment in Scripture is, “Do not be afraid.” The church of Jesus Christ has lived, worked, and died in eras equally as challenging as ours. All the doomsaying about perishing in a “post-Christian culture” only diverts us from our mission.

Do not be afraid.  The are words to reassure us, and they are words that send us out on the heels of Jesus’ command to “Get up and go.”

So…what’s your vision of big, transformative Jesus-mercy?  What’s your dream for the church?  (And it can’t be more members or more money; those are the only things off limits because that’s about self-preservation, not about the church being a good neighbor to others.)

Let’s name some of our dreams out loud.  After hearing from each person, let’s practice gratitude and praise for Jesus’ call and the vision not just to go to church, but to be the church.  We’ll respond with “Thanks be to God!”

And now what’s one thing YOU feel called to do to help this community embody that big, transformative Jesus-mercy vision?  Take a moment; see what bubbles up.  [Pause.]  And when your One Thing to Do is clear, I want you to hang onto it somehow.

Maybe put it in a note in your phone.  Or write it down on your bulletin.  But whatever you do, take it with you.  And do it!  Because if we are going to be a Neighborhood, Mustard Seed church, friends…if we are going to be a church Jesus and I can both believe in…it is going to take every single one of us.  And then some.

Get up and go, Jesus says.  May all of this and more be so.  This day and each day.  Amen.