By The Rev. Dr. Stephen Simmons

OK, so at our house we’ve been going through and recycling all the catalogs that we received during the weeks before Christmas (the Land’s End ones alone would form a stack two or three inches high), and here’s a choice little item I found in Sharper Image Holiday Gifts for 2021:

What a wonderful mashup of acoustic technologies! 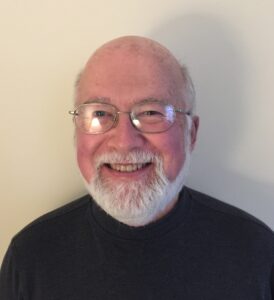 You can put this thing in a corner where it looks like an old-fashioned gramophone, the kind that your great-grandparents would have listened to; but its innards are state-of-the-art integrated circuitry that will treat you to Adele, or Billie Eilish, or Tony Bennett, or Yo Yo Ma, or whoever you want. A “unique listening experience,” indeed!

I can’t help wondering who’s in the market for this product, which aims to be both an instant antique and the wave of the future. I’m not sure that many of us would actually want it in our dining room or den permanently, but I think it does speak to a yearning that we all share in one way or another. Don’t we all want to feel ourselves securely anchored in the past even as we set our course for the future? And how many of us recently scratched that particular itch by tuning in, for the umpteenth time, to It’s a Wonderful Life or White Christmas or one of those countless versions of A Christmas Carol?

Who doesn’t want a story in which, after numerous hairbreadth escapes and reversals and startling revelations, everything turns out all right in the end? And who among us, at least sometimes, doesn’t want to trade our trek into an unknown future for a quiet stroll down memory lane?  It’s a very understandable human desire. But I’m not sure that wrapping the present in a protective covering of the past is the way to go.

Nostalgia, after all, tries to recreate an imagined past that was never quite as great as we remember it being. It’s a Wonderful Life is a wonderful movie, but remember that Frank Capra filmed it right at the end of the most catastrophic war in history, and as Russia was on the verge of getting the atomic bomb. You’d never know it. The film itself does take up serious issues like predatory banking practices and suburban sprawl, but at the end these dissolve in a warm bath of Christmas cheer, and the world remains pretty much as it was.

The real always has a way of lurking just below the surface of the ideal. And while a little pleasant escapism may be harmless enough, sticking to a glorified or sanitized version of the past to avoid the challenges of the present is responsible for much of the mischief in our world. We don’t live in Bedford Falls anymore, if we ever did.

So where do you we get our bearings and inspiration on January 2, 2022, at this particular intersection of past and future? As our Buddhist friends would put it, where can we find refuge in this New Year, a place from which to move ahead with integrity and genuine hope?

This is a hard passage to preach on, since it has no stories to expound or pithy sayings to unpack or rules for living to follow. Its bottom line is a simple invitation to trust and rest in God, and to make that our point of departure for everything else. Actually, I think it’s not meant to be interpreted as much as it’s to be absorbed, digested, lived into.  In the Greek, it’s one long sentence without punctuation, the longest in the entire New Testament, and it must have left its original readers literally breathless, as I think it was intended to do. It’s both mind-bending and straightforward:

God chose us in Christ to be holy and blameless in God’s presence before the creation of the world. God destined us to be his adopted children through Jesus Christ because of his love. This was according to his goodwill and plan and to honor his glorious grace that he has given to us freely through the Son whom he loves…We have also received an inheritance in Christ. We were destined by the plan of God, who accomplishes everything according to his design.

It boggles the imagination even as it speaks to the heart. The best thing we could do with these verses would probably be to read them together out loud three or four times, to practice them the way we would practice a piece of music or a brush stroke or a tennis swing until they became, as we say, “second nature,” hardwired into us, part of our spiritual DNA, and then to take them with us into 2022 as our internal guidance system.

This past week the world has been celebrating the life and legacy of a person who internalized this message and, through it, shaped the history of our times, and who continues to do so even in his passing. Archbishop Desmond Tutu of Cape Town, South Africa, did as much as anyone to bring the oppressive regime of apartheid to an end and to open the future by establishing the Truth and Reconciliation Commission, helping his fellow citizens to choose the way of peace and restoration over the way of revenge and bitterness.

In 1984, in the middle of what must have looked like an endless and hopeless struggle against the repressive South African regime, when he himself was doing funerals for, seemingly, countless victims of state violence, Archbishop Tutu wrote the words that we used for our call to worship today:

Goodness is stronger than evil,

Love is stronger than hate,

Light is stronger than darkness,

Life is stronger than death.

Through God who loves us.

Now this was before Nelson Mandela had been elected president, at a time when the world feared that a bloodbath was about to take place in South Africa. Plenty of people viewed Tutu as either a pious fool spouting the kind of nonsense that the clergy are supposed to spout, or as a dangerous subversive. But the good archbishop knew that hope isn’t hope when it looks, to the naked eye, like a sure thing. And he knew where he stood, where he had taken refuge.

God chose us in Christ to be holy and blameless in God’s presence before the creation of the world. God destined us to be his adopted children through Jesus Christ because of his love. …We have also received an inheritance in Christ. We were destined by the plan of God, who accomplishes everything according to his design.

In 2016, more than thirty years later, as his doctors were already telling him that he was suffering from a terminal illness, Archbishop Tutu wrote a kind of last will and testament with his dear friend the Dalai Lama appropriately called The Book of Joy (anyone who has ever heard his irrepressible giggle will know why). And he said this about his legacy:

“You obviously hope that you could be an agent for helping God’s children enter into their heritage so they can have greater fulfillment and can become all that they were meant to be. And you hope that they will realize that it will happen most of all if they are generous, if they are compassionate, if they are caring. (292-3)

It’s the same message as it was in Ephesians, as it had been in 1984, delivered with his usual, unflappable joy and unshakable resolve. Refusing to be captivated by the inertia of the past or flummoxed by the uncertainty of the future, he always knew where he was and who he was. This sometimes had both upsides and downsides. On at least one occasion, knowing the challenges and dangers he faced, he said, in some exasperation, “I wish I could shut up, but I can’t, and I won’t.” God chose him, as God has chosen us, before the creation of the world, and he knew that. And so he could also say,

In the end, what matters is not how good we are but how good God is. Not how much we love Him but how much He loves us. And God loves us whoever we are, whatever we’ve done or failed to do, whatever we believe or can’t.

And now he has passed this task along to us. And so we come to this place of transfiguration, wherever we may happen to be on the map or according to our GPS, at whatever stage of life we may be, to confirm that, yes, this is who we are; this is where we stand. God’s gift to us in Jesus Christ, whatever wrapping it comes in, is offered to us once more.

Over the past couple of years, it has come to us around kitchen tables and in living rooms, in a variety of juices and crackers and breads, in weird little packs with tear-off plastic covers, and, always, it is the Lord’s Table, and its meaning for us and its blessing to us have always been the same, whatever its outward form may be. It is the bread of heaven and the cup of life, refreshment on our journey into God’s future, wherever it takes us.