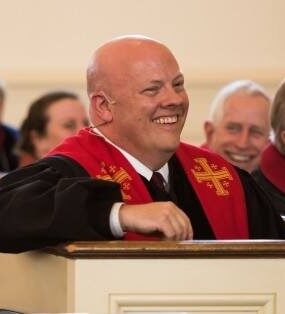 I am not an Atlanta Braves fan. I’m saying that up front because I know a lot of you are Phillies fans, and Atlanta is two games ahead of the Phillies right now in the race for the pennant in the National League East, so in the interest of church unity, I want to be clear about that before I go any further.

But I was an Atlanta fan for a long time until they moved the team out of the city eight years ago in a very shady deal for a new stadium that they didn’t even need. But until then, I had been a fan from the time I moved to Atlanta right before seventh grade. Which was really bad timing.

I don’t mean because it was in the middle of middle school, though that is true; I mean because I moved there at the end of the 1983 season, which was their last winning season for seven years. For seven long years, they were so bad that the team eventually began promoting ticket sales based on having “A Day at the Ballpark,” focusing on the food and the experience of coming out to the stadium instead of the games itself. Which was pretty telling, because it was a garbage stadium, but it still didn’t stink as bad as the team did.

Anyway, over the winter between the 1990 and 91 seasons, after completing not only a seventh losing season but literally the worst record in baseball in 1990, Atlanta hired a new general manager, a man named John Schuerholz. Schuerholz himself, in his Baseball Hall of Fame induction speech, called what he was brought in to do in Atlanta as nothing less than “The Great Transformation.”

And that’s what he did: he led Atlanta in transforming everything, from making a series of savvy deals for key players over the winter, to sweeping out the tired gimmicks in the stadium, to ripping out the entire playing field, which was infamous for its poor quality, and putting in grass that looked like a golf course and an infield that seemed like the marbled floor of a palace compared to what had been there.

An organization that not only tolerated defeat but had come to expect it changed, in a few short months, to one that not only believed but expected that it would go to the World Series that year, which it did, losing in a heartbreaking seventh game of the World Series to end what has been known ever since as “The Miracle Season.”

You don’t have to be an Atlanta fan to appreciate the power of that kind of transformation. Sports stories and movies are filled with some version of that narrative, and that narrative is so popular because it’s a particularly gratifying version of our larger cultural narrative of transformation: that we can be or become whatever we want to be if we just dream big enough, work hard enough, and want it bad enough.

And there’s just enough truth in that for it to be both compelling and dangerous. It’s compelling because it can really work: the world is full of stories of athletes and actors and entrepreneurs and explorers who have followed that formula to great renown and success. But it’s dangerous precisely because of that: because we want that story to be completely true, that everything is up to us, and that if we just dream big enough and work hard enough and want it bad enough, we can accomplish anything.

And the truth is that it’s not completely true, not even close: as one of my friends is fond of saying, if material success depended solely upon hard work and desire for a better life, then women in sub-Saharan Africa would be the richest people in the world.

But there are also many things we can’t, things that we simply have no control or power or even agency over. No matter how much we love someone, no matter how hard we try to be helpful, if they are unwilling to do the hard work of confronting and wrestling with the demons of addiction, there is nothing we can do to make them.

No matter how much we love someone, no matter how hard we try to be helpful to them, if they are unwilling to do the hard work of healing the brokenness from their past, there is nothing we can do to make them. And that is very, very difficult work, some of the most difficult work that a person can do.

And for real transformation to take place, there is a cost: they have to be willing to let go of some long-held experiences and assumptions and comforts and hopes and even basic identities. Sometimes, they even have to be willing to let some of those things die, because sometimes one thing has to die so that what is really needed can live and grow.

This last summer, when I was visiting my father in Atlanta, we visited a nearby nature reserve. One the exhibits they have there is a butterfly enclosure, where you can step in and walk among a number of different kinds of butterflies; they even give you little sticks with a sponge soaked in a kind of sugar water on the end, which the butterflies then want to land on because their taste receptors are in their feet.

While I was in there, I skimmed the information cards with a passing interest; I’d seen butterfly exhibits before, I knew the familiar, almost cliché story of their transformation, and you probably do, too. After all, one of the most popular children’s books ever written is The Very Hungry Caterpillar. It tells the story of a caterpillar who is, you guessed it, very hungry. He eats and eats and eats and becomes a big, fat caterpillar.

Then he builds a small house called a cocoon around himself and stays inside it for more than two weeks. Then he nibbles a hole in the cocoon, pushes himself out and (*spoiler alert*) emerges as a big beautiful butterfly. And that’s basically all I knew or needed to know about the transformation of a caterpillar into a butterfly. That is, until I happened to catch the word “resurrection” on one of those information cards in the butterfly enclosure.

As it turns out, there’s something of a scientific debate about what exactly happens to the caterpillar when it transforms into a butterfly. Basically, the caterpillar stops eating and literally digests itself inside the cocoon, dissolving all of its tissues until there’s nothing but a sort of caterpillar soup left with just a few groups of cells left that then begin multiplying into the new body parts of the butterfly.

None of that is even slightly controversial in scientific circles; the only real controversy comes from a scientist who looked at that data and concluded that the caterpillar itself essentially dies in this process: it stops eating, breathing, and growing, which are the most basic activities of life, and its body dissolves away. The butterfly that develops, then, is effectively a resurrection of the caterpillar in a new body; it’s literally referred to as the “Death and Resurrection Theory.”

This theory spawned considerable debate, and it ultimately seems to be more of a philosophical debate than a scientific one. But it also highlights the crucial truth of this famous story of transformation when Jesus resurrects Lazarus from the dead: transformation is not just making things different, or even turning something bad or wrong into something good, which is the way we usually talk about it.

Authentic transformation is not simply a change for the better, even a big change. No, it is a total metamorphosis from one reality to another; there is no going back after it happens, and it’s usually something far beyond our powers of decision-making or control, something that seems like… well, a miracle.

Yes, Jesus could have stopped Lazarus from dying, and that would have been a good thing to do. People, especially his sisters Mary and Martha, would no doubt have been grateful, and the onlookers would have been impressed. But here, in his last public act before Palm Sunday, Jesus needs to make clear that he has not come to make things a little better, to encourage people to be a little kinder, to help make life a little more bearable.

He has come to bring the transforming power of the kingdom of God to completely remake humanity and the world itself. And that kind of transformation has a cost. To show something of that purpose and power in raising Lazarus, he first has to die, because the point is that death does not have the last word, or the greatest power; even death is powerless to resist being transformed into life through the love and grace of God in Jesus Christ.

And even more so, that kind of transformation has a cost because if you read a few more verses after this (already long) story ended, you would see that raising Lazarus from the dead so unnerves Jesus’ enemies that it is the reason they decide that Jesus himself has to die, setting up the greatest transformation of them of all with his own resurrection on Easter. And most significant of all, nobody believes that he can do it. Belief follows the transformation in raising Lazarus from the dead, it doesn’t make it happen.

And that is both good news and a bit unnerving, I think, because it means that we can neither cause transformation out of our own belief nor prevent it by our own efforts or our lack thereof, any more than the caterpillar has to decide whether to become a butterfly or has the ability to choose not to.

Real transformation is always through the grace of God: sometimes when we least expect it, often when we need it most; and it is never, ever given in vain.