Won’t You Be My Neighbor?

By The Rev. Lindsey Altvater Clifton

Last week Mark’s gospel was calling us disciples to “go on and git,” listening to other people’s stories and sharing those of God’s love. This week, the invitation from Luke’s gospel is similar…to do love.  And while that sounds all well-and-good, I’m afraid that doing love is much, much more difficult than we like to admit.  So I begin this week with words from researcher and bestselling author Dr. Brene Brown:  “We can choose courage or we can choose comfort, but we can’t have both.  Not at the same time.”

Any half faithful preacher knows the truth of 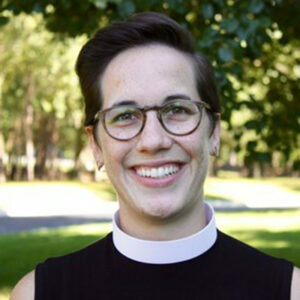 these words.  It is far easier for us to look for words of comfort in a given passage than it is to craft words that require courage—our own and that of our hearers.  I far prefer messages like:  “God is faithful,” “We are one in Christ,”  “We are called to be disciples of peace.”  Not that trusting in and embodying those principles are exactly easy, but they’re at least generally agreeable.

But that’s not really the heart of this text.  Every way I read the story we call the “Good Samaritan,” I heard a challenge rather than pat-on-the-back words of comfort.  So this one may take some courage, friends.  So please Jesus, help us be open, help us listen for God’s movement in the discomfort, help us feel the holy nudge toward Jesus’ call to “Go and do likewise.”

So hear again these words from Scripture:

But wanting to justify himself, he asked Jesus, “And who is my neighbor?  Jesus replied, “A family was going from Romania to Mexico City to the United States seeking asylum.  They were separated and the father and youngest child fell into the hands of immigration officers who took the four month old child away him, shackled the father to a chair, and dragged him out of the room, leaving the infant alone.

She went to him and held him close. Then brought him to a foster family, and helped get him settled.  She made sure they took care of him and worked tirelessly to reconnect the boy with his family.  Which of these three, do you think, was a neighbor to the man and baby who fell into the hands of the immigration officers?” He said, “The woman who showed them mercy.” Jesus said to him, “Go and do likewise.”

This is the story of Constantin Mutu, the youngest known child separated from their family at our border.  In June of 2018, his parents fled Romania with Constantin and his four-year-old brother to seek asylum in the US as they fled the violence that persists against the Roma people.  A year later, their story was shared in the NY Times.  As we would come to learn, that was not an isolated incident.

By January of 2020, at least 4,368 children had been separated from their parents at America border facilities (according to the LA Times); new details have continued to emerge about the overcrowding and inhumane conditions facing the adults and children held in such places.  By late November of 2021, a federal reunification task force reports that 2,248 children are now known to have been reunited with their families in the U.S. and that it knows of 1,703 who have not been reunited. An additional 206 are in the process.

And even as of the beginning of this year, National Immigrant Justice Center reported that the current administration is also routinely separating families through detention and deportation.  While there is plenty of partisan finger-pointing about what has been done, what needs to be done, what will be done, what isn’t up for debate is this:  these people are our neighbors.

People of color and indigenous people living in poverty created by systemic, ongoing legacies of colonization, racism, and white supremacy.  Poor, white rural communities without access to the education or resources needed for flourishing. And yes, asylum seekers, refugees, and immigrants desperate for safety and opportunity who are separated from one another and held in camps without provision for basic needs or human dignity.

The litany of pain and injustice is endless.  Literally and figuratively, there are wounded people on the side of the road everywhere we look.  If only we had the courage to look at them, to see their humanity, and to do love.  Because they are ALL our neighbors.

The hard reality with which this text confronts us are the ways in which we are all the lawyer looking for a loophole.  It is the question beneath the lawyer’s question.  He asks “And who is my neighbor?”  But we all know what he really wants to ask (and what we want to know, too) is “Who is not my neighbor?  Who may I legitimately set outside my concern and still feel good about myself?”

Preacher, author, and teacher Barbara Brown Taylor offers this reflection on the passage:  “The lawyer does what any good lawyer should do.  Desiring to justify himself, Luke says, he ask Jesus to define his terms.  “And who is my neighbor?” he asks, hoping for a little help, hoping Jesus might limit his liability enough so that he has even a prayer of being able to meet it.

But Jesus will not cooperate.  The lawyer wants to talk about love and about how complicated it is to be open to everyone all the time, how impossible, really, and can’t Jesus make the directions a little easier to follow…but Jesus knows that the last thing on earth the lawyer needs is another discussion and a little more understanding, so he tells him a story instead, the story you already know about how it does not matter what we think, understand, know, feel, or say about love…but what we DO about love that brings us life.”

Courage over comfort, friends.  Jesus’ call is simple – go and do likewise – but it isn’t easy.  Love God.  Love neighbor. BE a neighbor to ALL neighbors.  Make peace.  Do love.